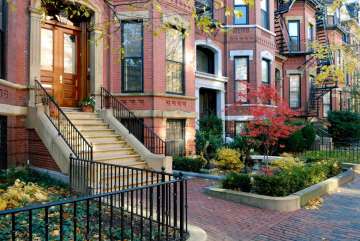 One of the city’s premiere neighborhoods, the Back Bay is known for it’s tree lined streets featuring Victorian brownstones and luxury row houses. Previously a marsh land, the bay was transformed into buildable land through a filling project during the 19th century, making it one of the most expensive neighborhoods to reside in today.

Convenient to public transit, exploring the Back Bay is a breeze whether you’re visiting one of its many upscale restaurants, ritzy hotels, or historic land marks. For the fashion connoisseur, the Back Bay is home to the famed Newbury St. boutiques, Prudential Center and Copley Place malls.

Attracting the most discerning clientele, the Back Bay neighborhood has remained a highly-sought after neighborhood and has prospered even during most challenging economic periods the city has faced.

Back Bay Homes & Condos for Sale

Miles of coastline and beautiful beaches; small towns; big cities and all the culture and sophistication of Boston’s Hub, we are here to help you discover Massachusetts. Offering superior service in all aspects of residential and commercial real estate, you can be sure your real estate needs will be handled personally, professionally and expertly. Buying and selling your home is one of life’s biggest decisions and we are your Go to Agents!
Meet Our Agents